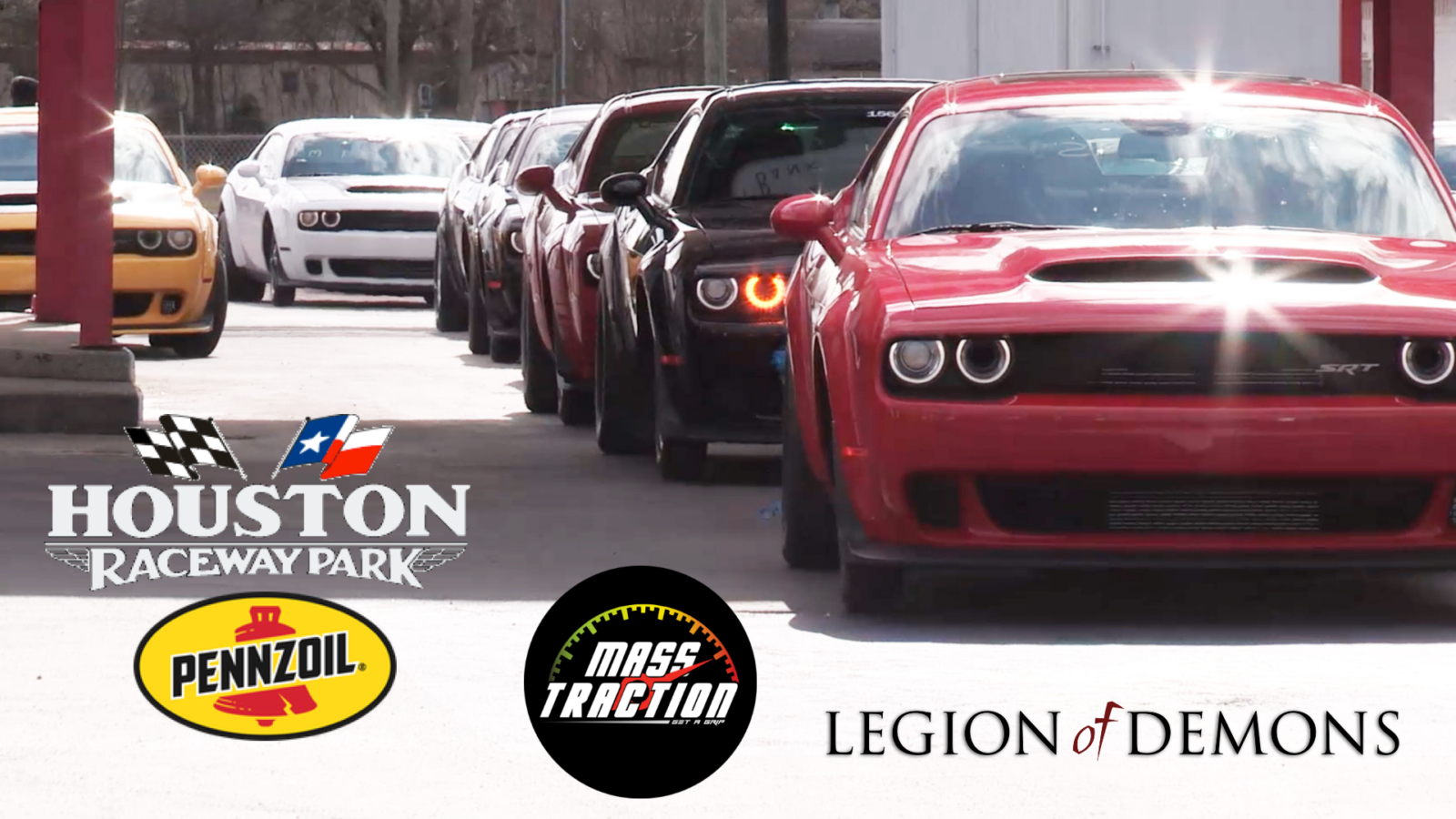 Chandler, AZ, January 20, 2019 marks the record-breaking assembly of Dodge Demon owners in one location at the same time. Mass Tractions “First Gathering” of the Legion of Demons Car Club, attracted 48 of the quickest cars exiting the Dodge production line, with each car reaching finals on Sunday receiving a time slip in the 9’s.

The private event produced by Mass Traction, a custom drag strip prep company owned by Brandon and Sunny Mass, was designed as a car-club collaboration with Tim Godbee, Legion of Demons with two big goals in mind. Every racer gets a 9 second time slip and match and/or break the Demon record previously set by NHRA-famed Leah Pritchett with her 9.65 sec. pass. Demon owners descended on Houston, TX to gather in common unity around their cars. Attendees shared tips, tricks and specs knowing that an 9.65 ET was theirs for the taking. The event drew in representation from as far away as two Canadian provinces and 19 US states.

With only 3,300 cars produced off the Dodge production line and rumors of less than 500 Demons hosting over 500 miles in break-in qualification for the Demon’s drag mode, the “First Gathering” hosted nearly 10% of the available cars to race with the largest simultaneous gathering of Dodge Demons at one time.

Brandon was inspired to produce the event after the release of the Dodge Demon when many naysayers said it wasn’t possible to consistently achieve 9 second passes. During the Demon’s development stages, prior to release of the car. “The engineers at Dodge called us in to prepare drag strips across the country,” says Mass. “They needed a consistent track condition to base all of their testing data. Wherever testing was taking place, we were there to provide Dodge a professional baseline track condition.”

Two valuable sponsors assisted in producing the “First Gathering” event.  FireAde provided fire protection for the cars. Hot Shot’s Secret provided products for attendees to use, in addition to providing products for the Mass Traction transportation team which travelled throughout the country to each track.

“Hot Shot’s Secret provided goodie bags for the racers including fuel and oil additives. They also support us with engine oil and fuel additives for our Cummins hauler truck.” Brandon Mass added, “These products are amazing.  We’ve crunched a few numbers and by using Hot Shot’s Secret, we have been able to save $4000 in fuel costs, and we have the added protection to our engine and better power.  This is some amazing stuff!”

For the “First Gathering” event, Brandon and Sunny set out to duplicate the testing conditions they helped provide when Pritchett set the record. Unable to control the fact that the record was set by a professional driver, in a single-seat interior, in -1200 D.A., the main element they could control was their expertise in track conditioning. In the search for good air, Mass Traction & The Legion of Demons chose Houston Raceway Park for their event knowing the track elevation matched nearly sea level. With DA reaching beyond -2000 and nearly duplicate track conditions on Sunday, the only force against the “First Gathering” racers were the 20-30 mph wind gusts. “It may have been the headwinds that kept anyone from matching or beating the 9.65 record,” says Mass. “The 60’ ETs were coming out even better than Leah’s spec, so we really look forward to trying all of this again!”

Mass Traction claims the following results from the event:

Brandon reports the weekend was a complete success where everyone worked together to learn about the set-ups across the entire field of drivers. He says, “This was more of a clinic trying to replicate the same sequences we conducted during testing, running three pair groups in hot laps of three passes. What we really liked about this event is that the participants were not racing against each other, they were racing with each other. Seasoned drivers were helping first-timers, and the drivers could really get to know their cars. Our goal was for everyone to  get their due seat time, and collaborate with one another throughout the event. We wanted them to be able to make mistakes, and learn without the scrutiny of an audience. The overall goal was for everyone to enjoy the experience and be able to discuss each other’s specs and set-ups. Plus, with NHRA banning the stock Demon in sanctioned competition, we wanted to provide Demon owners a professionally prepped drag strip surface allowing them to experience the car to its full potential while being safe at the same time. Without the resources of professional-level racing as an option, we have to gather on our own to help thrive in a private group. When a stock Demon runs 9.999 and quicker, they are asked to leave the NHRA event for safety purposes.”

“First Gathering” was by all accounts a successful fun event with zero accidents and zero safety issues, and lots of new friendships and information established.

Mass Traction provides traction solutions across the country within the racing industry providing optimum style track prep for every type of vehicle. For more information about Mass Traction visit MassTraction.com or reach out directly here.