First and foremost what is track prep? Track Prep has a multitude of types. Let’s take a look.

General Track Prep could relate to a private track used for production vehicle testing, inside a building, outside on the street, or even a NASCAR track.

Mass Traction has experience working with multiple production vehicle companies on confidential projects. One that we can talk about is the Dodge Demon project. Working with Dodge & SRT engineers we built a 150 ft drag strip launch pad. Inside of a building. Yep, inside of Pier 94. For the reveal of the Dodge Demon during the New York Auto Show. And – we returned the surface to bare concrete (but that’s a story for another day).

Drag Strip Prep relates specifically to the preparation of the timed eighth mile to quarter mile surface, most commonly at a drag strip. Mass Traction provides drag strip prep services along with onsite and international virtual consulting. Our experience includes prep at over 20 tracks plus multiple virtual consulting projects.

Sometimes tracks need what we call a Track Tune Up. Other times we are hired to teach staff how to perform general track maintenance and drag strip prep. Often times it is the race promoter that reaches out asking us to provide super prep when the surface needs to be extremely consistent for the style of racing. 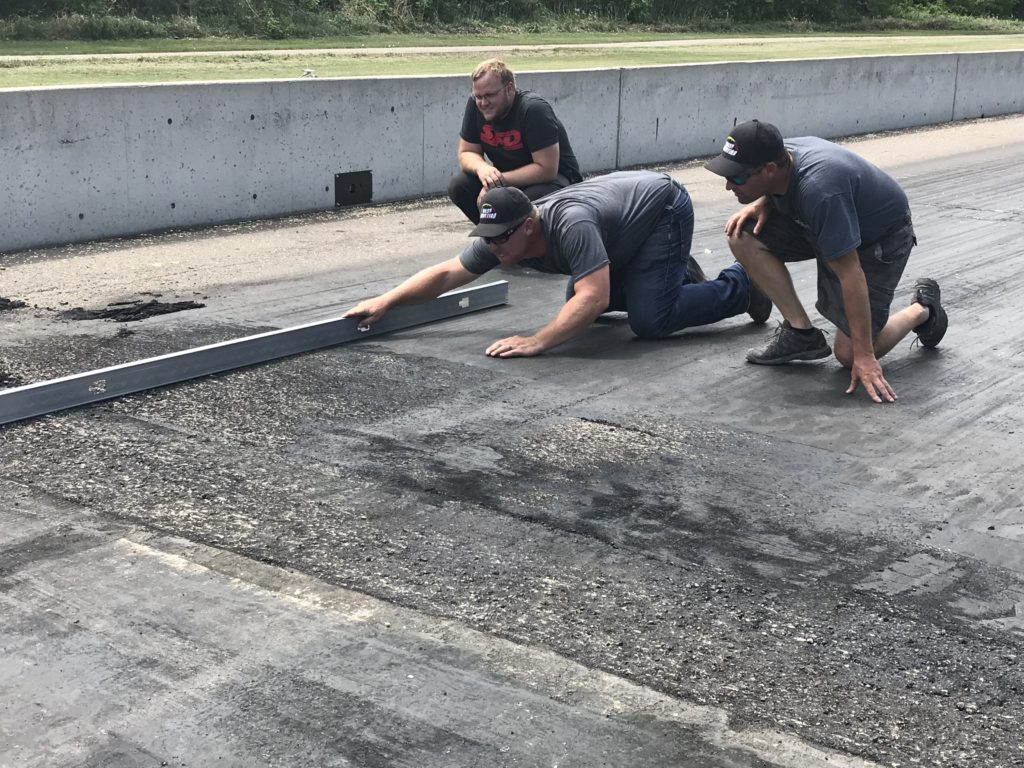 In the past six months alone, we have completed 40+ onsite drag strip examinations. What we observe through our travel is nothing less than a PREPEDEMIC.  Just spraying a bunch of glue/traction compound on the surface is not the proper way to prep a drag strip. There is a whole lot more to prep than just product!

Unlike other track prep providers, we are NOT distributers of a specific type of traction compound product. Repeat…Mass Traction does NOT sell traction compounds. There are many variables that come into play to properly prep a drag strip. Two of the most important things are cleanliness and maintenance which we will discuss further below. 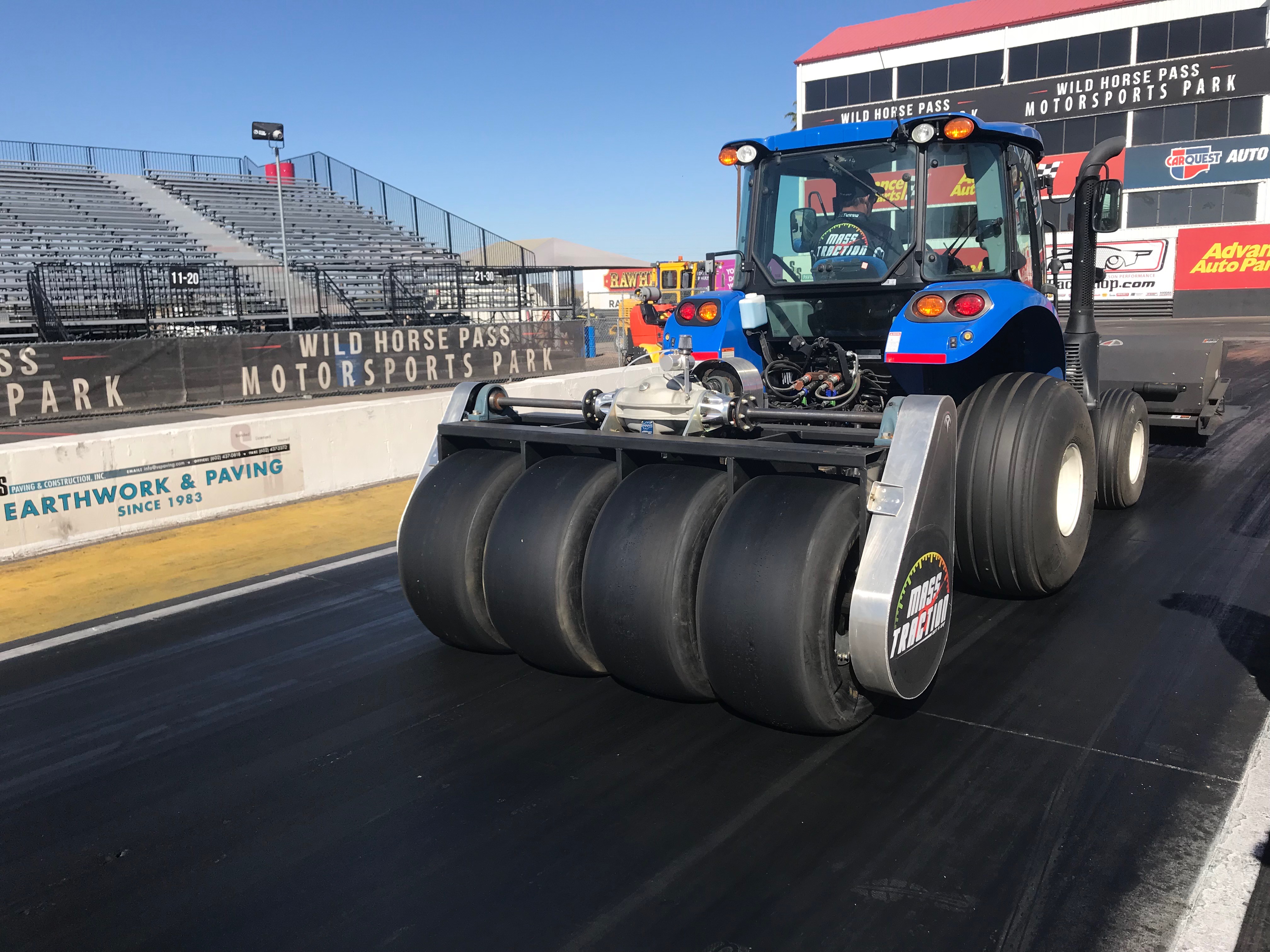 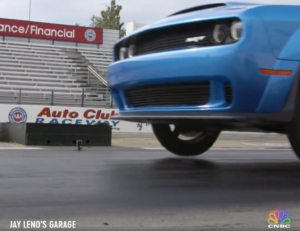 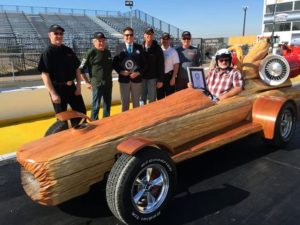 Mass Traction is equipped as sort of a mobile circus including just about everything you could possibly need to prepare a track or drag strip – right on our trailer. We have put on over 40,000 miles in just the past 6 months alone! When we purchased our equipment we wanted the best and we got it. Our tire rotator unit is serial number 19 in the world. Mass Traction is the only traveling track prep company to own the coveted Larry Crispe rotator, and it is a real track beast! 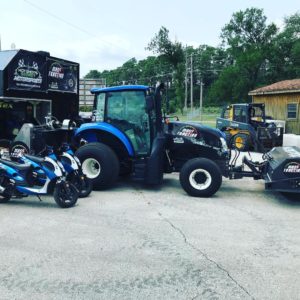 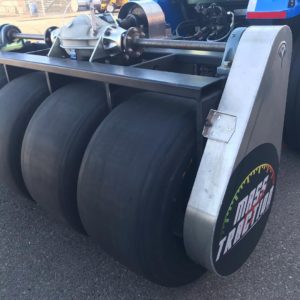 You all know the Street Outlaws & No Prep Kings right, who doesn’t? With the popularity of No Prep racing in today’s racing world, this is most certainly a controversial topic.

No Prep is a style of drag racing that supposedly doesn’t require preparation. What we keep witnessing across the country at No Prep races are totally inconsistent surfaces. Sometimes the drag strip is prepped the day before the race. We are talking actually scraped, scrubbed, swept, drug and sprayed with glue then left to sit and marinate until the gates open and racing begins.

On the flip side, we see instances where the track truly just left the old rubber and glue on from the past (who knows how many races) and runs cars down with nothing more than a sweep, calling it a No Prep. Incredibly dangerous as this old rubber and glue likely has less traction than bare concrete. What about consistency?

Un Prep is a term we have coined as our own term to describe what Mass Traction does to make No Prep racing consistent and safe. If No Prep is supposed to mimic street racing, shouldn’t the track surface be scraped down to bare 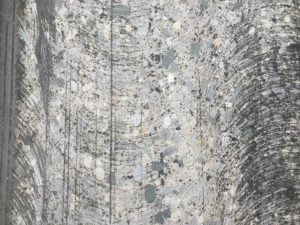 concrete instead of sitting full of chunky product from the last race?

We think so and that’s precisely where we fit into the No Prep drag racing equation. Mass Traction has the knowledge & specialized equipment to come in and scrape that drag strip down to bare concrete – creating a level playing field for drag racing and a safer surface with consistent traction. With our Un Prep – the racers can use the traction compound of their choice at the starting line and go for it.

Speaking of scraping, it should be done after every single event. We even scrape during an event if the rubber & traction compound buildup is too much. Mass Traction has the experience to safely remove the buildup quickly and efficiently without damaging the base.

It can take six to eight people days to hand scrape a drag strip down to bare concrete prior to an event. It surely doesn’t seem to make much sense to do it that way, especially since each person will be using a different technique & amount of pressure.

Mass Traction has developed an efficient way to scrape the entire quarter mile drag strip down to bare concrete in one day. Our one-of-a-kind skid steer mounted 32-inch scraper is equipped with a 6 million BTU flame properly angled to do the trick for a full scrape. We also recently designed custom torch brackets for our hand scraper making it possible for a hand scraping to be a one-man job. 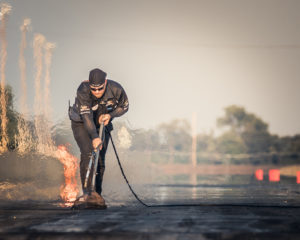 Have you ever been at an event and watched someone scrape diagonally? Stupid. Then you see a bunch of chunky marks on the drag strip? Gross. Have you ever smelled that nasty burnt rubber smell during a scrape? That comes from holding the flame too close to the rubber. It causes the rubber to turn into a crispy carbon that will most certainly pop the concrete. Scraping should not be attempted by amateurs. Mass Traction has the experience to safely remove the rubber & compounds quickly and efficiently without damaging the base.

Many of the track problems we are hired to perform could be avoided with proper maintenance. While some repairs are due to lack of knowledge others are due to inability to operate equipment properly. One of the most important aspects of maintenance is scraping, as described above. 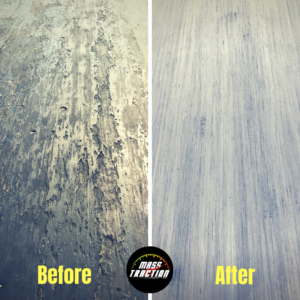 Because of the potential to damage the surface, many tracks just don’t do it often enough to keep their track healthy. A healthy track begins with the base. It is crucial to start with a sparkling clean surface. A clean surface involves much more that a quick broom or blowing off the surface.

With that being said Mass Traction track prep does not begin at the starting line. Our track prep starts in the pits before a single racer pulls in. This area is thoroughly swept, cleaned and vacuumed all the way through the staging lanes and up to the starting line. If you have noticed rocks stuck to your tires all day long, this step was probably skipped. Upkeep during the event is key to a ensure optimal conditions and happy racers. 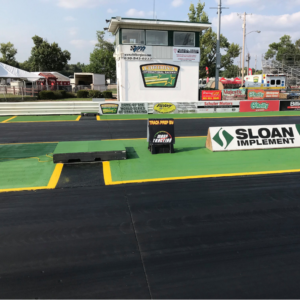 If you need help with track prep, drag strip prep, or surface consulting Mass Traction will customize a package to fit your needs. We can provide consultation services or onsite services. To learn more click here, give us a call at 218-851-8922 or contact us today.